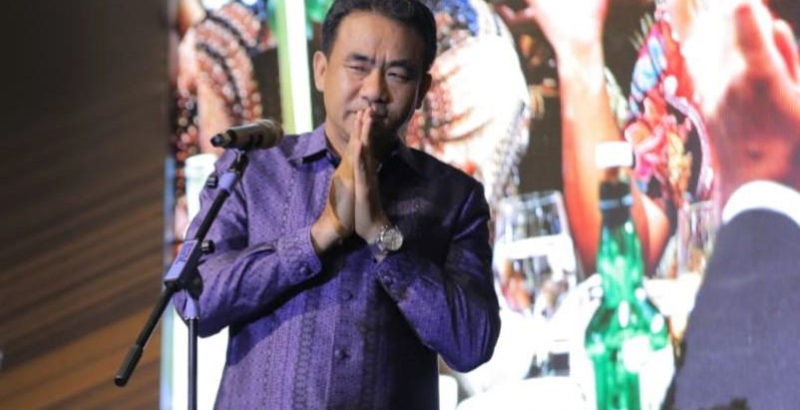 High ranking Cambodian official HE Eng Yane, Advisor to Samdech HENG SAMRIN,President of the national assembly Secretary of State who also attended the gala dinner also said that Cambodia had a conducive atmosphere for the investment climate for Kompong Dewa foreign investors. Therefore he invited foreign businessmen to invest in Cambodia. He appraised his country as the diamond in Asia and would soon be a strategic business place that connects trades from China and the rest of South East Asia. Sihanoukville is free of pollution and traffic jams, and the seafood is alive
and not just fresh, it’s hard to find such quality of sea food somewhere elses.

All the names of building buildings on this project take names such as warriors in Hindu’s folklore. Demi God and it’s from two different epic story well known in Indonesia Hinduism community. The story is Mahabrata and Ramayana. For example the 11,000 meter2 twin offices named Sadewa, also another 11.000 meter2 Nakula, and 31 floors Arjuna office iconic tower with total area of 60,000 meters2. Then a five-star hotel with 400 rooms named Bhima, two apartments with a total of 900 units, called Rama and Sinta apartments. Do not miss the state of the art sport center called Pandawa. Then the international class exhibition hall that takes the name Ramayana. The location of this magnificent project is in the city of Sihanoukville, Cambodia. For information,
Sihanoukville is a city that is growing fast. Local and non-local business people gather in this city for promising business opportunities. Because the city is the center of a new export import stop that will rival Singapore. This is supported by the flexible and flexible regulation of the Cambodian government to support investment in Cambodia.

“Sihanoukville has experienced rapid growth in the past two years. In 2019, 100 high-rises building will serve industrial tourism from overseas, especially China,” said a prominent businessman resort in Sihanoukville, His Excellency Sambath Rathanak, Chairman of Queenco resort, The Rich Resort and the Super Rich Resort was also present at the Kompong Dewa Gala dinner and was one of Kompong Dewa’s shareholders. Therefore, one of Kompong Dewa’s main projects is the Arjuna office cyber tower. The office building which has 28 floors has been almost 50% to just private investors with sales value approaching US $ 50 million. It was obvious that the interest of business people saw Kompong Dewa as a place for their cyber technology business. This Arjuna office tower is fully isolated with glass curtain wall design, the original design concept is a box to the bottom and does not shrink. The Arjuna office tower itself has reached the development stage
as targeted. “We expect Arjuna’s office to be completed in 18 months,” Robert added. Tenants of office towers need not fear to not having a place to live. Kompong Dewa provides Rama and Shinta apartments with a total unit of 900 units as a place to live with a beach view that spoils the eyes and soothes the soul. This apartment also has a sky garden to spend time to relax after a long day at the office.

Not far from the office tower, wooden luxurious villas are available. Yes, the villas are indeed made from natural wood from Sulawesi. Later it can be used for business partners who have meeting needs in the office tower for several days as temporary serviced residences. This villa is only for rent. Kompong Dewa really focuses on becoming a one stop cyber park resort, not only office buildings to work and also apartments. Still in the Kompong Dewa area, there is a fitness center or sport center called Pandawa. There is no question about the completeness of the Pandawa sports facilities. Residents can enjoy a variety of sports facilities to maintain fitness. There are also jogging and bycicle tracks that surround the Kompong Dewa. Besides that Kompong Dewa has exhibition hall building means for international expo. Again the hall building has the puppet name, namely Ramayana. In the future, various kinds of international exhibitions will be held in this building. “You don’t need to bother to find entertainment venues outside the Kompong Dewa area. We expect our customers and residents or office tower workers to be well served and not have to leave our special economic cyber park zone location,” Robert explained. Visitors who come from any country can also stay in the Bima hotel, which is very close to the Exhibition Hall.

Furthermore, Kompong Dewa also became a project equipped with smart system building solutions. Each building puts forward the concept of green building that is applied to the maximum extent possible to save energy and be environmentally friendly. In addition, this cyber park resort also has a state of the art computing data center that has experience in many data centers in Asia and Europe. “We are building buildings using the standards of The Building and Construction Authority of Singapore,” said Robert. Sihanoukville already has a submarine landing station fiber optic network connection that provides super-fast connections, at a lower cost. Of course the most important thing is a trusted security connection. The installed cable has a capacity of 30 Tbps far exceeding current demand, which is estimated to be only around 200 gigabits for all of Cambodia. The third submarine cable is under construction by the Cambodia Fiber Optic Cable Network (CFOCN) to connect the Cambodian kingdom with Asia Africa Europe 1 (AAE-1) cable. This network will connect Southeast Asia with Europe and has a capacity of more than 40 Tbps.

Previous Article
Proin ultricies malesuada id gravida.
Next Article
Kompong Dewa, One Stop Living That You Must Have in Cambodia